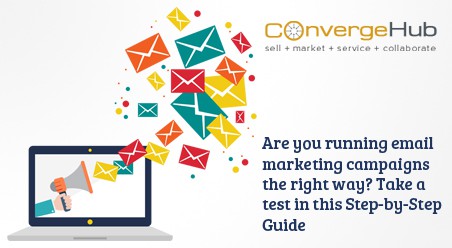 Do you know Tricks of Best email marketing campaigns, if not learn with us. Decade ago, marketers scratched ideas on a piece of paper, ran email campaigns and crossed fingers that results would follow. The campaigns did and did not generate results. But the marketers kept running them.

It was aimless shooting in a pitch dark room where the campaigns would hit the bull’s eye sometime and missed the target often. But the reason why marketers kept taking these chances was that while they had an idea that their campaigns weren’t working as per the standards, they couldn’t identify the exact loopholes.

There were no proper tools and the campaign results were gained in disconnected pieces.

According to CSO Insights, more than 65% of businesses are not satisfied with their email marketing campaigns. The reason is the absence of a well-defined strategy and the usage of disconnected tools that makes it tough to measure campaign results.

Businesses need a new framework for running email marketing campaigns. A plan of action needs to be framed that has the following crucial components:

Here’s a step-by-step blueprint for planning and launching an email marketing campaign. Take a look –

So it is advisable to marketers to brainstorm several sessions, discuss and debate multifarious topics and finally zero in on the best one. It is important to involve the entire marketing team because although brilliant ideas are floating around everywhere, they get lost in the shuffle if not heard.

Tip: Create a folder where all agents dump their campaign ideas. Go through each of them in the team meeting and make the final choice. Before the campaign gets off the ground, discuss the following aspects:

Discussing these will help to keep things streamlined and organized from the initial stage itself.

2. Identify the Audience and what resonates with them

Build the message keeping the audience on top-of-mind. Find answers to questions such as:

Do not set vague and obscure goals such as ‘more sales’. Be as specific as possible when setting goals for the campaigns. So if the prime objective is increasing sales, then break down the goals in the following forms:

Having specific to-the-point goals will make it easy to assess the results of the campaign later.

Email marketing campaigns can only deliver the desired result if they push the recipients towards a call-to-action (CTA). That is why it is essential that the campaigns are framed as such that they foster and inspire action at the end. So create a dedicated landing page for the marketing campaign that directs prospects toward the goal and simultaneously allows you to easily track the success of your campaign.

In addition to these, many businesses include a video in the landing page. You can do it too if you want to show your product in action that helps prospects visualize themselves using it.

It actually increases conversions. However, remember that incorporating video in the landing page is a challenging venture that will require lots of resources. Make sure you do not neglect other important elements on your landing page, in the lieu of the video.

Tip: Do not forget to frame the follow-up message for the email campaign. This will be immediately sent out to the recipients, once they carry out the desired action on the campaign landing page. Follow-up messages will confirm the action of the recipients and not leave them in a state of bewilderment.

It doesn’t makes sense to invest time and resources into email campaigns if you do not have the means to know how they are performing. New-age CRM software solutions are the best platforms to carry out email marketing campaigns and assess their results as well. There is a set of predefined templates available. You can choose either from them or use the editor to create a customized email template specific to your requirement.

Reports and real-time analytics in the CRM is an added advantage that helps you understand the performance of your email campaign better. Using this feature, you can track:

CRM makes it easier for any business to access precise campaign data and accurately track the behavior of the prospects all the way down the funnel You can set up reports to see the point at which people are dropping off and optimize those spots in the conversion funnel.

Email marketing campaigns are not one-time games. It is important to continue the communication to convert leads into customers and existing customers into repeat customers. And this is precisely where lead nurturing comes into the picture. CRM plays an instrumental role in lead nurturing. It empowers businesses to keep offering value to the prospects through different forms of contents. Targeted contents over a period make prospects happy and they are more likely to do business with you.

Once the campaign has come to an end, look back and evaluate the results. Hold a meeting and discuss the following points:

These discussions help the marketing team to understand the campaign results and make constructive changes in the upcoming ones.

There is no one sure formula to create a successful email marketing campaign. However, following a series of documented steps promise to maximize viewership and put the business in a better position to gain the desired ROI out of the campaign. So it makes complete sense to be organized and systematized rather than blind and intuitive. Isn’t it??

How to use emails with Lifecycle Marketing to drive business growth?

What Is The Nuanced Difference Between Influencer Marketing Vs Brand Advocacy